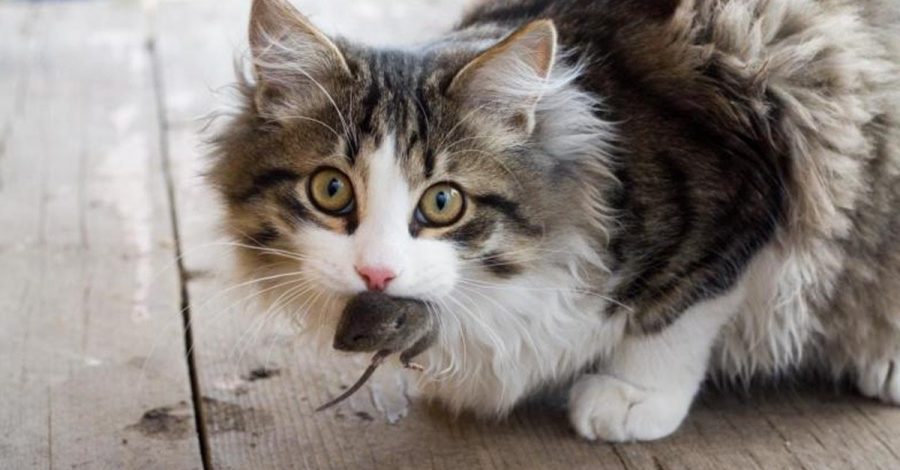 How To Successfully Stop Your Cat From Bringing You Live Animals

Vicky Symond from Brisbane, QLD writes: My cat likes to bring me gifts from outside. She has brought dead cockroaches, spiders and recently she started bringing live animals such as mice and even a lizard! How do I get her to stop bringing them in? I don’t want the animals to get hurt.

Cats truly are remarkable creatures. Whilst they have chosen to live with us and merge with our human world, they still maintain a wild side, more so than dogs. Cats tend to bring ‘gifts’ or offerings to their people for many reasons. Most commonly, they like to bring their hunt home or show their skills of protecting the family. Whilst we may not appreciate the gesture as much as they would like us to, there is logic and understanding behind their ‘loving’ actions. Read on to find out why your cat brings you gifts and how to fulfil that natural instinct without them killing animals:

It is a common myth that cats are selfish and independent; a cat loves in a way that is unique only to cats, they do not show their affections the same way a dog or a bird or a horse would. Cats will often bring offerings to the house to show their contribution and appreciation to you. They know how much you love and care for them, so they like to show that in return. It is their way of contributing back to you and your family.

How wonderful is that? If you show your cat that you do not appreciate their gift such as throwing it away or making a horrid fuss of what they brought, they see it as a challenge to bring something better. A client of mine named Bruce had a gorgeous black cat named Sam who would bring his dead prey home. It started off with dead mice on the back door mat as Sam sat proudly beside his catch. Unfortunately Bruce in disgust picked it up and threw it in the bin and scolding Sam in the process. Well, Sam thought his catch wasn’t good enough so he started bringing home dead rats. Again Bruce picked it up by the tail and threw it in the bin. Sam was dumb-founded at Bruce’s response, so not only caught a huge rat but also dismembered it on the lounge room rug. Well that was the last straw for Bruce he yelled at Sam and put him outside. It left Sam no choice but to really impress Bruce as his offerings were just too insignificant, so he brought in a live snake. As you can appreciate Bruce freaked out and he then organised a consultation with me immediately, to sort out this dire situation.

In our consult, Sam told me that he had such an appreciation for Bruce and their friendship, and the fact that Bruce provided food and shelter for both of them he felt he needed to contribute back to their household. He felt by catching prey and bringing it home to share was his way of honouring Bruce and assisting in providing food for them both in the only way he knew how. So every time Bruce threw out the mice, Sam said he saw it as not good enough so he would ‘up the ante’. After explaining this to Bruce, we discussed a few solutions to make this easier for both parties. Bruce was to make a huge fuss about Sam’s gift. Tell him how wonderful he was and how much he appreciated the offering. Once Sam wasn’t around, then Bruce could safely remove the animal. I also told Bruce it would be great to spend more time playing with Sam, using a few toys to fulfil his hunting instincts. This would help to reduce his prey drive and release any pent up energy. A few weeks later, Bruce contacted me to let me know that the gifts had stopped showing up and he and Sam were having a great time playing together and strengthening their relationship! Case solved. 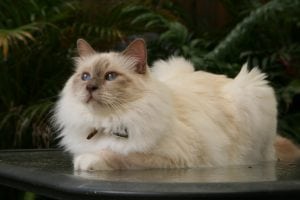 Whether your cat has an indoor or outdoor lifestyle, they see your home as territory to protect, not just for themselves against other predators, but also to protect you and the family. Perhaps cats know that our senses and hunting skills are somewhat dulled since we have become used to easy access to food and shelter. When I was living in Sydney, my boy cat Shea used to kill spiders in the house and would yowl loudly until I came to see him and he would stand proudly in front of his kill and say to me ‘look what I did! Nothing gets past without me knowing.’ Not only was he proud of his hunting skills but he was also showing his prowess at protecting the house. Needless to say I praised him and told him how wonderful he was, and then checked the welfare of the spiders when he wasn’t looking. The more I acknowledged his role as protector, the less live animals I saw curled up next to him.

As we know, cats have strong natural hunting instincts that they need to fulfil all the time. If they were living in the wild, they would hunt for their food and simply for the joy of the chase. If your cat has a complete diet, they are more likely to hunt for the pleasure of it. Cats that are lacking in nutrients will look for sustenance somewhere else, and being carnivorous animals, they will look for small animals such as lizards, mice and insects. As your cat sees you as family, your cat knows that their hunting skills are way more advanced than yours, and will happily share its bounty with you. There are studies that show female cats; particularly desexed female cats are more likely to try to bring hunted prey back to their people. It is believed that they are following their instinct to teach their young how to survive, and their next closest family is their people.

My client named Rosanna had an indoor/outdoor ginger cat named Louie whom used to hunt birds and mice. He would bring them into the house and place them on her expensive rug, and when she would not take the prey, he would eat it there and then. Rosanna came to me to find out why he was doing this, and also what she could do to fix the issue as he was also gaining weight from the extra food. After connecting with Louie, we found two issues going on – Louie was more wild than domestic, and he preferred to eat naturally, which in his opinion was hunting wildlife. 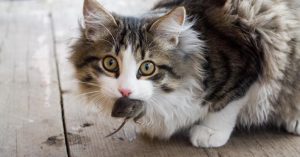 Secondly, he said he always felt hungrier after eating his regular food. Rosanna said that she was giving him sachets of wet food in the morning and biscuits at night for his teeth. I suggested to Rosanna to change his diet and swap the wet food for fresh red meat (with added vitamin/mineral supplements) such as kangaroo or beef, and continue the biscuits for now in the evening until he was used to the fresh meat. Louie was feeling the lack of nutrients in his diet, and was trying to substitute with hunted prey. We also discussed playing more games with Louie, particularly hide and seek games with a toy on a string to simulate the live prey that Louie enjoyed hunting so much. A couple of weeks later, Rosanna contacted me to let me know that Louie had not only stopped bringing dead animals into the home, he also had shed a bit of weight too! He was much happier, he enjoyed the hunting games they played together and Rosanna was relieved to have a clean rug too.

So there you have it – whilst you may not be as thrilled about the gruesome gifts on your floor or in your bed, knowing that your cat is doing this out of love and appreciation to you is wonderful! The misconceptions that cats are selfish and don’t show love is not correct. Cats are one of the most loving, affectionate and wise creatures on our planet. Learning how your cat shows their love and affection to you will deepen your bond and set the foundation for many wonderful years together.

Previous Post Do Animals Grieve For Each Other? Next Post Mirroring: Our Animals’ Way Of Telling Us What Is Wrong
Menu